Sin flourished in the brothels along Water Street in the late 1800’s. Proper Victorian women and their children kept their distance from the bluff above. Banned from the downtown area, so they wouldn’t mix with the seamy women for hire, the wives and offspring of seafaring captains stayed in their mansions on the hill.

The division still exists today, but not for the same reasons. Geographically there’s still an uptown and downtown, but anyone is welcome to roam between the two.

Port Townsend is one of only three registered Victorian seaports in the United States, due to its preserved marine and architectural heritage. The town holds an annual Wooden Boat Festival (this year’s was the 34th) and prides itself on a number of fine dining restaurants that serve local seafood.

I just tried one of those restaurants in September – T’s Restaurant. They serve salmon, scallops, local Manila clams, prawns and more in addition to the chicken, steak, duck and pork chops. I highly recommend this family operation. Tim, the chef, wanted to be a chef since he was very young. He would serve his parents breakfast with a towel draped over his arm and then present them with the bill. I know I mentioned this restaurant before, but it bears repeating. 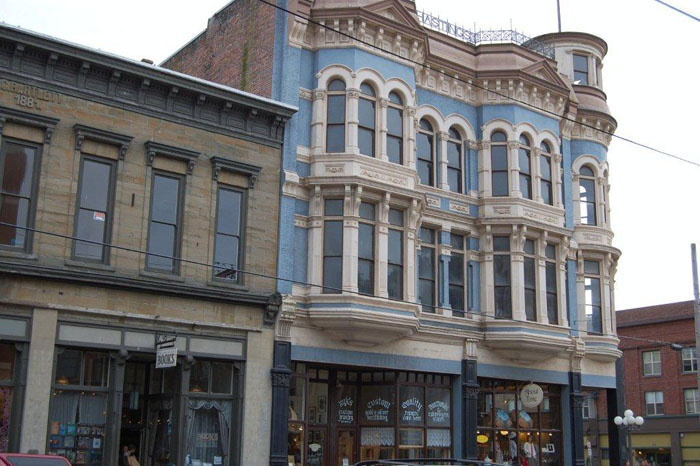 One of the historic buildings in downtown Port Townsend

Back to the late 1800’s and early 1900’s – People who opened businesses in downtown made a fortune from the never-ending marine traffic. With their new found wealth settlers tried to recreate the look of New York City. Using lots of brick, tall windows and doors, exposed cast iron pillars and trapdoors inside some of the buildings they created a look unlike any other town in this state. Modern renovations have preserved that look in a grand way.

If you can, take time to enjoy a movie at the Rose Theatre, one of those beautifully restored buildings. The Rose opened in 1907 and moved to its current location on Taylor Street the next year. It is one of the most treasured features of Port Townsend’s National Historic District.

Besides the best, fresh popcorn and superb sound, every show is personally introduced by the Rose’s host.  (www.rosetheatre.com) It’s an experience you’ll not soon forget.

Close by is the Silverwater Café, another knock-your-socks-off culinary delight. I recommend the crab shooters – crab leg meat, crab bisque and Sambuca cream – not something you can order anywhere. It’s delicious as are all the seafood offerings and the beef, poultry and pasta. And it’s just steps away from the Rose Theatre.

2 thoughts on “Port Townsend: A Victorian Seaport Then and Now”