As you might imagine, Soap Lake is a body of water, but it is also a town of 1,500 in Eastern Washington. I’m pretty sure they all know each other, because while we enjoyed a tasty restaurant dinner there at Don’s everybody else in the eatery recognized each other and chatted with them.

Soap Lake was formed by a mammoth waterfall that eroded basalt rock into what is now Dry Falls. When the waters of the last big flood receded, it left the mineral-rich lake. More than 15 minerals fill the lake, some say giving it extraordinary healing powers. Soaking in the lake water and spreading the lake mud over hands, arms and faces to facilitate healing was done by indigenous people, settlers and is still done today. 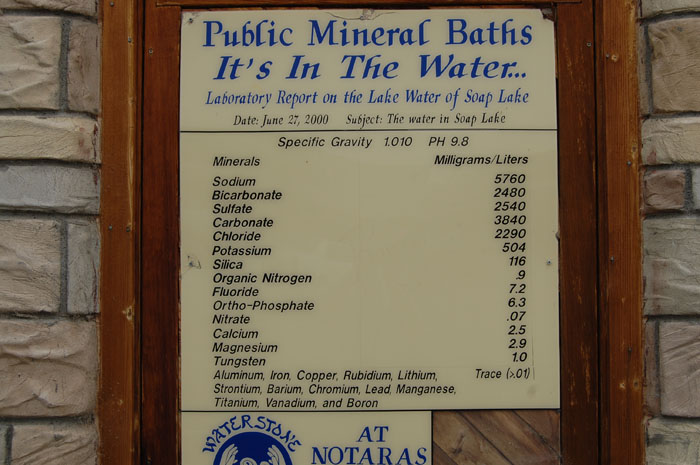 A list of all the mineral Soap Lake contains.

The name, Soap Lake, seemed appropriate because of the foamy ridges that formed on the beach on windy days. Besides the lake itself, local spas offer a Soap Lake experience where you can soak in lake-filled tubs. (Although a broken pipe has stopped that temporarily, it will soon be fixed.)

From www.soaplakewa.com:  Some day, Soap Lake will be discovered by the rich and famous. They’ll build a fabulous resort and take advantage of this absolutely one-of-a-kind mineral lake. They’ll hear about Soap Lake and its remarkable history. They’ll swim in the water and lie in the sun and know they have found a place that nourishes their soul as well as their bodies. They’ll be drawn back year-after-year until they decide to stay for the rest of their lives.

If you aren’t rich or famous, visit soon, before the price goes up. If you are rich and famous, we’ve been waiting for you.

Besides relaxing in the sun, Soap Lake has lots of activities throughout the year like Winterfest, the second weekend of December, with a juried art show, art sale, crafts and music. Lava Run to the Sun is a motorcycle rally in late July and the Soap Lake Box Derby takes place over Memorial Day Weekend.