The North Cascades Highway or State Route 20 is the northernmost route across the Cascade Mountain Range in Washington. It affords travelers a wide array of beautiful vistas and is part of the Cascade Loop, a 400-mile driving tour through the Cascades. This highway is only open from April through November, because of the intense avalanche danger the rest of the year.

Tootsie Clark, who is well into her 90’s now, has for many years performed the same ritual every year on opening day of the North Cascades Highway. She gets up at 2 a.m. and sets to making her famous cinnamon rolls. When she has enough ready she packs them into her car and travels to the beginning of the highway where she passes them out to all the drivers waiting for the road to open. 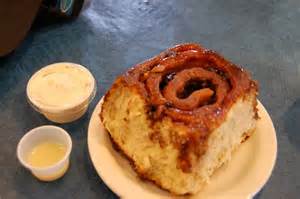 These cinnamon rolls can be ordered by the rest of us at The Eatery restaurant in Rockport, where Tootsie still helps out in the kitchen. But don’t go for breakfast thinking you can order a roll off the menu and have it delivered to your table. No, you must reserve these sweet treats the night before for breakfast the next day, due to their extreme popularity.

Besides serving good, tasty food, The Eatery houses many items indicative of the history of the area. That was Tootsie’s idea – to make it a museum and a restaurant.

Last weekend, my husband and I took the Skagit Tour on Diablo Lake, located just off the North Cascades Highway near Newhalem. I remembered taking the same trip in my tweens and it stuck with me. Then it combined a ride up a pulley contraption, a boat tour and a farm-style chicken lunch where you passed around platters of chicken and bowls of mashed potatoes (even then that was my favorite part). 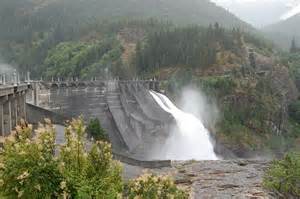 I’ve been wanting to go again to see if it was how I remembered it. Because Diablo Dam and two other dams in the area create the majority of the power for Seattle City Light, they had always handled the tours before. Then last year, the economy forced them to cancel for the year. This year Seattle City Light partnered with the North Cascades Institute and the North Cascades National Park to bring the tours back.

The day begins with a healthy buffet lunch, organic salad makings, soups, macaroni and cheese, plus a variety of desserts. After a short orientation by one of the park rangers, you’re free to wander the grounds, check out the gift shop or hike down to the boat launch. I visited the gift shop and found out a mama black bear and her two cubs had been sited on the property just four days before. I sincerely hoped I didn’t meet up with her.

We boarded the Alice Ross III (she’s had two predecessors) at 1 p.m. for the narrated boat tour of Diablo Dam, which was built in 1920 and Diablo Lake. We passed by two islands – one named Deer Island, because deer actually swim out to it to sample the grass and another named Monkey Island. 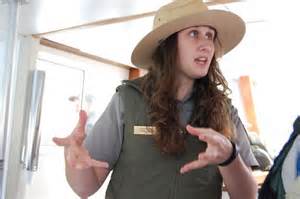 Ranger Lauren telling us about Monkey Island and other stories

J.D. Ross was the supervisor of Seattle City Light when Diablo, Ross and Gorge Dam were built. The story has it that he was quite a showman. So he populated one of the islands with monkeys and when the boat tour went by passengers saw monkeys swinging through the trees. In no way is this a climate monkeys like so every night a zookeeper had to take them to a warm place to sleep. Now the monkeys are gone.

When you go on this tour, you’ll hear lots more stories like the one about Monkey Island. I highly recommend it as informative, educational and above all, very pleasurable. It’s not the same tour of my childhood, but it’s still a very good one.