When I was young, the Smith Tower loomed over all the other buildings on Seattle’s skyline. Built in 1914, the Tower became the first skyscraper in Seattle at 484 feet tall with 38 stories. More than a century later, it’s dwarfed by the Columbia Tower and even the Space Needle, but it remains an iconic part of the city with some changes that may surprise you.

Insider tip:  The Smith Tower is less crowded than the Space Needle.

Now, for an entrance fee, you can relive those days of yesteryear through a self-guided tour, 360-degree observation deck and speakeasy bar. While you wait for the elevator, complete with an elevator operator dressed in period garb, scan the gift shop for some super cool items like tissue paper depicting a map of downtown Seattle streets or snow globes with Seattle icons sealed inside.

Smith Tower is holding special events this year that they’ve dubbed “Smells Like Seattle Spirits.” Each event features a new bootlegger cocktail and a speaker who charms the audience with a bit of Seattle history. On April 1, you’ll hear about Fred Olmstead and his full-time bootlegging gig. May 6, on tap is “The Feds Fight Back.” Check back here for dates for the rest of this year’s series.

A little of what you’ll find in a trip to the Smith Tower is better explained in photos.

Small bites are offered in the tower. Another option is Tat’s Delicatessen across the street, which is very popular with downtown office workers. Lots of subs, hoagies, Philly steaks, soup and salads to choose from. 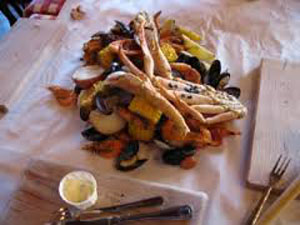 Dinner at the Crab Pot on Seattle's waterfront

I worked at the 1962 Seattle World’s Fair, the one Elvis Presley visited and President John F. Kennedy opened. If I told you more about how young I was then, those that are good at math might figure out my age. Just know, I was there and that event marked a lot of history for Seattle.

Century 21, as the Fair was called, created several new venues that still stand today. The most iconic is the Space Needle, but what was then called the Science Pavilion also stands and is now the Pacific Science Center. The Bubbleator, a see through elevator, sits in a residential yard in Des Moines, or at least it did a few years ago. We are totally into recycling here.

But this post is about the Science Center http://www.pacsci.org, which until last week-end, I hadn’t visited for several years. In that time it has blossomed into a very hip and cool place for the entire family. Was I impressed? Yes, as were all the other members in our party from my two-year-old granddaughter and 11-year-old grandson to my daughter and husband. Everyone found a particular activity or two or three that he or she just couldn’t get enough of.

For Kita, the two year old, Tot Town held her interest for more than an hour, which is unheard of in her little world of moving from one toy to another to the TV to running around all day. She was mesmerized by the water play opportunities and when we did talk her into moving, she drove a car, tried different sized slides and then wanted to repeat the water play.

One of the first words Kita learned was “butterfly” so our main intention for this trip was to visit the Tropical Butterfly House. This exhibit maintains a temperature in the low 80’s, which feels wonderful on a brisk, fall day. My daughter thought she’d move in with her hammock and a Mai Tai.

Butterflies of all sizes and colors fill the room, so much so, that you must be very careful where you step. If you’re one of the chosen ones, a butterfly or two will land on you and you can strut around showing your “adornment” to others. You can view new butterflies emerging in the chrysalis viewing window – these new butterflies are released into the exhibit each morning. What a wonderful hands-on learning opportunity for the entire family.

Also noteworthy, the Mindbender Mansion, a temporary exhibit on site until January 2011, attracts teens and pre-teens, asking them to solve puzzles. Dads might enjoy playing chess with the bigger-than-life-size chess pieces. Then there’s a Harry Potter Exhibit, insects, dinosaurs, sounds and so much more.

A perfect end to a day at the Science Center means a meal on Seattle’s stunning waterfront. At the Crab Pot http://www.thecrabpotseattle.com, your meal is tossed onto white butcher paper and then you select your seafood of choice and attack it with a mallet or gently remove it from the shell. No silverware required. You’re given a bib so as not to tarnish your clothes with fish juice.

Although several Crab Pot restaurants exist, I can’t imagine one with a better view or fresher seafood than the one on Seattle’s Pier 57.