At the City Park in North Bonneville, I spotted a family of five Bigfeet and Littlefeet plus more Littlefeet frolicking in the trees. 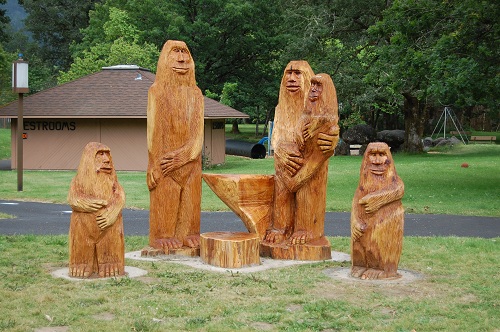 Maybe it’s because Bigfoot hunting is prohibited in Skamania County. Or because the residents of North Bonneville were welcoming and friendly. But this family of Sasquatch (or is it Sasquatches?) has moved from the Cascade Forests to this small town that was built for the workers on the Bonneville Dam project in 1934.

Large footprints guide you to the various Littlefeet who seem to be hiding in the trees at the park. But if you look closely you’ll see them and the Littlefeet are very curious about humans and hardly shy at all unlike their Bigfeet parents, so you may find yourself talking to them.

Birds, squirrels, owls and rabbits live in perfect harmony with the Bigfeet and Littlefeet in this park.

Skamania County is the only sanctioned “Sasquatch Refuge” in the world due to the large number of Bigfoot sightings in the Gifford Pinchot National Forest, so if you’re a fan you should put this place on your visit list. You won’t regret it.

Have any of you spotted Bigfoot?

I’m back from the land of BigFoot sightings – Lewis County in Southwest Washington. We didn’t see any thing, but our nephew’s size 14’s. Nothing of the legendary BigFoot variety.

BigFoot, also known as Sasquatch, a giant ape-like creature, has been seen, heard and smelled in places like Mossyrock and Rainbow Falls in Lewis County. The BigFoot Field Researcher’s Organization (BFRO, www.bfro.net), a real scientific entity, has investigated many of these reports.

The sighting I find most odd was one I saw on TV. A woman who lived in a cabin in Tennessee (yes, he gets around) claimed Sasquatch knocked on her door and asked to borrow some garlic. I guess he was cooking Italian that night.

I’ll leave it up to you to decide whether or not Sasquatch is real or imagined. But since I didn’t find any evidence either way, I went on to take in some roadside attractions. I love the concept of people erecting things to attract travelers’ attention. Remember the old Burma Shave signs?

On this trip I was able to find the Yard Bird’s statues and the world’s largest egg. 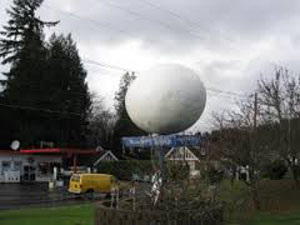 In Chehalis two of the statues remain at the Yard Bird’s home improvement store. There used to be many more. One, a gawky cartoon bird, 30 feet tall and at least 50 feet long; faces a main road. On a dark, dreary day this one didn’t photograph well, but its smaller counterpart at the front entrance did.

Currently the “World’s Largest Egg” (I’m sure there are probably larger eggs) is painted white, but at Easter it resembles an Easter egg and on the Fourth of July, it bears the stars and stripes of the American Flag. This town used to be a major producer of eggs, hence the mascot egg that is twelve feet long and weighs 1,200 pounds.

Winlock also has an annual Egg Day celebration where egg salad sandwiches are given away.  The town is located about three miles west of Interstate 5 off Exit 63 and on State Route 505.

What is your favorite roadside attraction?