As a child I always wanted to be a ballerina and dance on my toes. Instead my parents signed me up for accordion lessons. If I’d known how hard toe dancing was then, I probably wouldn’t have minded the accordion. The special pointe shoes help keep your toes together, but the dancers still have to have tremendous strength in their feet and legs.

While watching the Pacific Northwest Ballet School’s production of “Snow White” in Seattle this past weekend, I marveled at how many of the dancers spent prolonged periods of time on their toes. What a feat.

All the footwork looked clean and crisp. The 70+ students performing showed extreme flexibility and graceful movements at every turn. This was the opening performance of “Snow White” yet everyone seemed well-rehearsed.

I went to see this ballet with my daughter and three-year-old granddaughter, Kita. I thought Kita might fidget or even have a full-blown melt down having to sit still for awhile, but she never once took her eyes off the dancers. Upon arrival we were given a booster cushion for her to sit on so she could easily see the stage. Of course, there was a lot of movement on stage, brightly colored costumes and a King who narrated the action.

As you probably remember, in the story the Evil Queen, Snow White’s stepmother, wants to be “the fairest of all.” Every time she asks her mirror who is the fairest, it replies, “Snow White.” In order to get rid of her competition, the Queen tries to harm Snow White in a number of ways. Finally, disguised as a beggar woman, the Queen tempts the fair young maiden with a poison apple. Snow White can’t resist, takes a bite and falls into a deep slumber. It’s not long before a handsome young Prince happens by (after all it’s a fairy tale), falls in love and wakes Snow White.

When the Evil Queen discovers her nemesis is still alive, she tries to put a curse on the mirror and becomes caught in her own image for all eternity.

The entire ballet lasts an hour, which is just perfect for young children. At the end, the dancers were met with some well-deserved, thunderous applause. 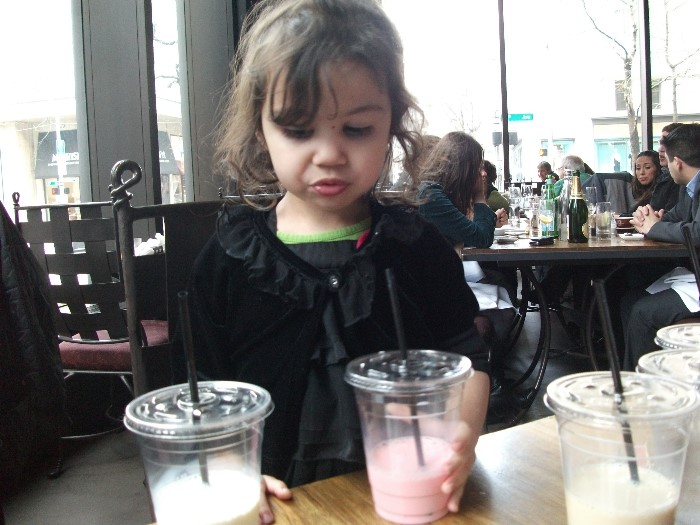 Kita trying to decide which flavor of milk to try next at the Purple Cafe.

We stopped for lunch at the Purple Café and Wine Bar in downtown Seattle prior to the ballet. There Kita was served a milk flight – glasses of white, chocolate, strawberry and caramel milk, which kept her entertained until her food arrived. All in all it was a totally kid-friendly outing.

20 thoughts on “Snow White and a Milk Flight”