Morford Family Carousel in Kent delights both children and adults

Hidden in the entertainment section of the newspaper on Thanksgiving Day was a short announcement about the opening of the Morford Family Carousel in downtown Kent at Second Avenue and Harrison Street. Who doesn’t love carousels? They just make me feel happy watching them go round and round. And this one was no exception. Our granddaughter opened her eyes very wide while watching the horses go up and down and around at the same time. 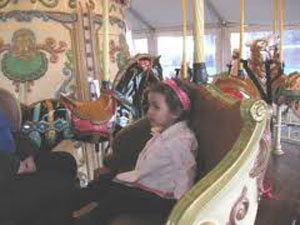 Kita was hesitant at first, but grew fonder of the ride as it continued

This classic Venetian-style carousel features 19 carved and painted wooden horses and three special seats, including a sleigh. It was designed by the famous Bertazzon Carousel Company in Italy. Once owned by the Morford Family, they have since donated it to the City of Kent. Non-profits now use it as a way to raise money for their organization. 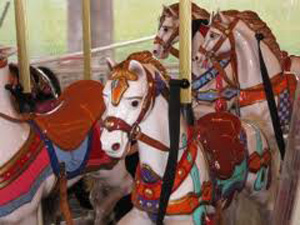 Children’s Therapy Center which supports children with all disabilities will be this season’s beneficiary of the proceeds. The suggested donation is $1 per ride, plus they have a free raffle of gifts from Kent merchants. How can you go wrong with this?

Westlake Park also hosts a holiday carousel every year at this time, which is located at 401 Pine Street in downtown Seattle. This one is a 1906 Parker Carousel and cost $2 per ride. Ride fees benefit the Downtown Seattle Association and Treehouse, a charity for children in foster care.

While visiting Tacoma’s Point Defiance Zoo & Aquarium, you can take a ride on the Paul Titus Antique Carousel. This re-created wooden carousel was first built in 1917. Its hand-carved and painted animals were created by the Washington Antique Carousel Society and Friends. To follow along with the zoo theme, endangered species and Northwest native animals line the inner ring with Washington state themed horses on the outer ring. Open during zoo hours.  www.pdza.org

For those traveling to or who already reside in the eastern side of the state, The Art of the Carousel is on display until February 28, 2011 at the Chase Gallery in Spokane’s City Hall.

Spokane also boasts a carousel built by Charles Looff in 1909 at Riverfront Park. This one has made the National Register of Historic Places. More than a quarter of a million riders experience this Spokane treasure each year.

Where is your favorite carousel?