One of my favorite thriller writers has a new book out titled “Unspeakable.” In it, a child actor (Collin) realizes that when he’s hypnotized another person emerges, a very dark, sinister and dangerous boy who lived 50 years before. While Collin sleeps, his friends become murder victims. Could he have done it unknowingly? That lays the foundation for fires, stabbings and untold unpleasantries.

Once again O’Brien, who lives in Seattle, has made me sleep with the light on. And this book contains more than 500 pages so the bulb burnt out a couple of times. A silhouette was lurking in the shadows on many of these pages. And I heard creaks around the house long after everyone, including the dogs, were deep into their slumber. 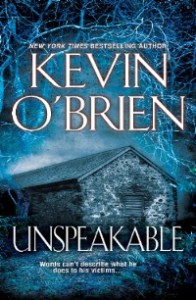 But that’s what makes the suspense real and why I’m such a thriller fan and especially an O’Brien devotee. My friend wants him to write faster so we’ll have more to read. I don’t know if faster would be better, because now he pens some terrific stuff.

What I also found appealing about this book was the author’s accurate portrayal of the atmosphere in Seattle during the days of the World’s Fair in 1962. How could someone who isn’t old enough to remember Century 21 write such precise details of the culture we experienced then? I worked at the Fair and my coworker’s daughter had a date with Elvis Presley when he filmed his movie here. I may have dated “Wade” from Unspeakable, but escaped before I became a liability. You’ll have to read the book to find out about that reference.

I highly recommend you pick up this paperback original or put it on your Kindle or Nook. Feel the tension for yourself.