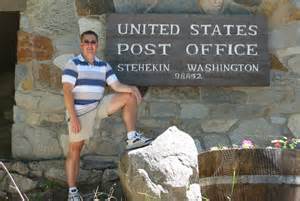 David had his photo taken in front of the post office at every city in Washington he visited.

Although Washington’s scenery is splendid and our attractions can be awe-inspiring, when you get right down to what makes our state special, it’s the people who make our region spectacular. I recently heard about a gentleman who realized his goal of visiting every city in Washington State in a little over four years and wanted to hear more about how he accomplished this. David Williams, marketing analyst by day and Washington State explorer by night and on week-ends, was kind enough to answer a few questions for me.

How did you strategize your travels in order to achieve your goal of visiting all 493 cities in four years?

David:  In order not to miss any cities, I spent several weeks studying road maps, zip code boundaries and Washington State’s incorporated cities table. In the end I decided that the best method would be to visit the cities county by county. I would pick a county, invite my friends or family members who were interested in going with me, make sure we had a place to spend the night, and then hit the road.

What knowledge did you gain about Washington by visiting every city?

I also met people I wouldn’t have otherwise. In the small town of Starbuck (nothing to do with the coffee), in Columbia County, I met the Mayor. When I purchased some snacks from her at the general store, and asked a few questions she told me she was the Mayor. She also pointed out the highlights of the 143-resident town. You never know who you are going to meet when you take the time to talk to people.

What city or town surprised you the most?

David:  Roche Harbor on San Juan Island. Before I started this project I’d never set foot on San Juan Island. Because Roche Harbor has a post office, I knew I had to visit that town. Roche Harbor is unlike any other place in Washington. Once a company town for the Tacoma and Roche Harbor Lime Company, which was run by John McMillin, Roche Harbor now has a mausoleum where the entire McMillin family is buried. After asking a few questions about the community, I decided I should spend the night and check things out. With a nineteen-acre art walk park, marina, general store, the Hotel de Haro, and a great seafood restaurant, I was quite surprised by how much I fell in love with Roche Harbor. I know it sounds like it, but I do not work for the Roche Harbor Tourism office.

What town has the strangest name?

David:  Humptulips in Grays Harbor County. Even though it is a Native-American term meaning “chilly region,” it sounds strange when you say it.

How much time did you devote to this goal of visiting every city?

I gave myself five years (January 2001 to December 2005) to visit all of the cities on my list, but managed to complete the project in four years, eight months. At the end of the project, to say thank you to everyone that traveled with me, I had a lunch party and awards ceremony at the Washington State History Museum in Tacoma. Along with a video presentation, I gave personalized awards to all of my friends and family members who supported me on the project. At the lunch party I announced my decision to continue my project by creating a Phase Two (completed in June 2008) and a Phase Three; which I am currently involved with now. I have already decided to add a Phase Four which will start sometime in 2015.

To read more about David’s other projects, visit www.visiteverycityinwashingtonstate.com

5 thoughts on “Meet David Williams: He Has Visited Every City in Washington”